The Handler Marketing team provided all the marketing materials for the Be A Sport charity, which encouraged kids to stay out of trouble by participating in sports. Rick Handler wrote, produced and directed a television public service announcement called “Choices” featuring the Be A Sport co-chairmen: Pittsburgh City Councilmen Bob O’Connor and Alan Hertzberg, and Pittsburgh Steeler Hall of Fame running back Franco Harris. The “Choices” PSA ran on all Pittsburgh television stations, raising awareness of Be A Sport awareness and increasing donations of sports equipment to needy children.

Rick Handler landed Councilmen O’Connor and Hertzberg appearances on local television programs in support of the charity. Handler Marketing also designed and produced a poster for the Be A Sport sports equipment drive. The Handler Marketing team was honored by Pitsburgh’s City Council with an official proclamation of thanks for its work on behalf of the charity. 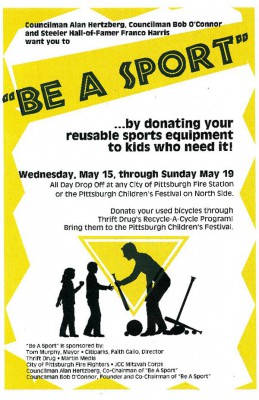 Click here to see the Be A Sport television PSA with Councilmen Bob O’Connor and Alan Hertzberg and Steeler Hall of Fame running back Franco Harris: